Hefetz: Netanyahu sat next to me while we edited his Walla interview

Traditional Israeli Food – Is there such a thing?

On the Hummous, Felafel & Pita Trail

Hummous, hamos, houmous, hommos, hommus, hummos, or hummus is a dip or a spread made from cooked, mashed chickpeas blended with tahini paste, olive oil, lemon juice, salt and garlic. Sometimes it is rich and creamy, sometimes thick and chunky, whichever way, it is a taste sensation.  Almost every cuisine of the Mediterranean countries and the Levant lays claim to hummus.

Eaten for breakfast, lunch and supper, as a snack, an appetizer, a main dish or when you are entertaining.  You can be served hummus during an Israeli breakfast at your hotel, at a celebration, a wedding, a Bar/Bat Mitzvah or even at a circumcision.  Hummus can be eaten standing up or sitting down; it can be eaten in a pita, off a fork, off a spoon or licked off a knife.  It is served at the neighborhood kiosk, food stall, in eateries and fancy restaurants.  You get tens of varieties of hummus– Hummus Asli (genuine hummus), Hummus Abu Gosh (made famous in the village of Abu Gosh outside Jerusalem), Hummus with Tahina (tahini paste, lemons, garlic and olive oil) Hummus with Matbucha (roasted peppers), Hummus with Ful (fava beans), Hummus Levanoni (a taste of the Lebanon), Hummus and chickpeas (served with mashed hot, chickpeas), Hummus with pine-nuts, Hummus with fried mushrooms, Hummus with roasted  eggplant, original Hummus, Grandma’s hummus or Hummus like it once was, Hummus and tomato, Hummus with pickles or just plain old Hummus.

If you’re lucky enough to watch hummus being plated in a eatery it will definitely add to the gastronomic experience.  From a huge bowl, containing a mountain of hummus, enough to feed an army, the chef takes a pestle, dips it in and scoops the hummus onto a serving bowl.  He has been scooping for years and has perfected the art. With lightening speed, he drops the hummus, from the pestle, into the middle of a plate.  With expert dexterity, he will spin the plate in one hand, manipulate the pestle and form a perfect circle of hummus around the edge of the plate.  From another equally huge bowl, he takes another pestle and dips it into tahina (tahina is made from sesame seed paste – tahini, lemon, garlic and olive oil) then he expertly drops the tahina into the center of the hummus, forming a small peak. He sets the plate down, picks up a bottle of the darkest, thickest, richest and most aromatic olive oil that his grandmother, in the village, probably made last week.  He holds the bottle of olive oil at shoulder height and drizzles the oil around the tahina.  From another bowl, he takes chopped parsley and sprinkles it over the plate of hummus.  Finally a sprinkle of paprika – and walla (Hebrew slang) – a perfect plate of hummus is ready to be served with freshly baked pita

The chef repeats this process hundreds of times a day. For around 25 Shekels ($7), you can experience this wonderful delicacy.  In most establishments, the hummus will be served together with a plate of assorted vegetables; pickled cucumbers, raw onion, tomato, pickled carrots, bitter olives, pickled eggplant  – “hammutzim’ and pita bread.  A cup of Turkish coffee (Kafe Sha’chor) infused with cardamom, rounds of this nourishing and simple meal.

When Israelis say in Hebrew “Bo le nagev k’tzat hummus” it literally means lets go out and “wipe a bit of hummus”.

To eat hummus like a true Israeli you will break off small pieces of pita, dip it into the hummus and then eat it, eventually wiping the plate clean.  Although good manners in some circles, but not the authentic way, you can scoop the hummus onto a fork and then spread it on the pita.   Eating hummus this way you will identify your as a newcomer or tourist in Israel. 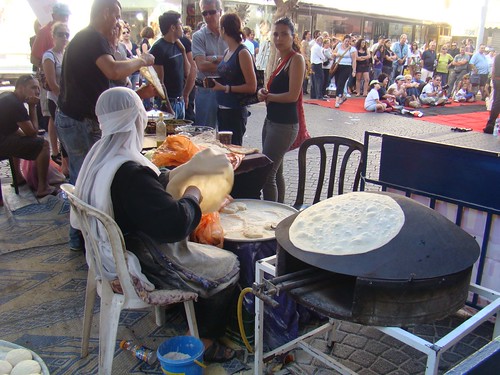 Now this brings us to the pita: an amazing journey of flour, yeast and water combined with heat to form a type of unleavened bread.  There is Pita Asli (note this name appears frequently in Israeli cuisine), Pita Druzi (Druze pita), Lafa, Grandma’s Pita (the same one that made the olive oil in the village) or Toast (toasted pita with garlic).

Pita is flat-bread; the dough is rolled into small circles and traditionally baked in a Taboon – a clay oven heated by fire.  The pita is baked for a few minutes and during the baking process a pocket is formed.  This pocket becomes a useful receptacle for all kinds of fillings including the all time favorite – falafel.  Pita Asli, has a slightly different texture, it is more chewy dough and has a coarser texture.  Pita Druzi is a very large, thin bread.  A mildly fermented dough, it is excellent for wraps or broken into flat-bread crisps.  Traditionally the dough is stretched over a large, soft, round, floured surface (often a cushion) and then placed on a heated metal surface, that resembles an inverted wok, for a couple of minutes. The resulting delicacy is ultra-thin, crispy bread.  The Druze pita is eaten with hummus or Labaneh (sour goat’s milk cheese).  It is also a convenient wrapping for other fillings. Lafa is a flat-bread that originates in Iraq. It is of medium thickness, slightly chewy, doesn’t tear easily, and is mostly used to wrap shawarma (a grilled meat dish traditionally made from lamb).  Regular pita, is sold in packs of 5 or 10.  You can buy it in the supermarket, the corner grocery, the shuk and bakeries.  It is easy to gobble down 2 fresh pita with your hummus.  Hate to bring this up, but do remember that each pita has the equivalent caloric value of 3 slices of bread. 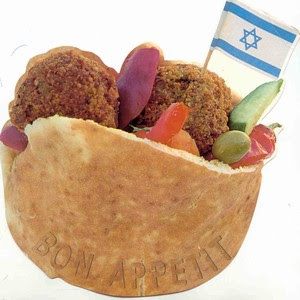 Pita is the pocket of bread that falafel [recipe] is traditionally served in.  Falafel are small, round, fried balls of coarsely ground chickpeas and/or fava beans. Parsley, onion, and spices like cumin and coriander are added.  Sesame seeds, for a delicious nutty flavor, are sometimes added just before frying.

The famous falafel, Israel’s fast-food, is mostly eaten on the go. Bought at falafel stands, competition is rife.  You will find establishments with names like “The King of Falafel”, “The Falafel King”, “The King of Kings of Falafel”, “The Golden Falafel”, “Famous Falafel”, “Dream Falafel”, “The Best in the Country” and somewhere there must be a “Grandma’s Falafel”  – and they are all fighting for first place.  Falafel balls are deep-fried while you wait.  You may be offered a complimentary falafel ball to taste while you wait. When your falafel is ready, you will be asked which fillings you want.  The choice is wide; Israeli salad (finely chopped tomatoes and cucumbers with a dressing of lemon juice and a little olive oil), pickled cabbage, hummus and tahina of course, pickled cucumbers, a piquant tomato puree with onions and maybe chilies (harissa or schug) and sliced tomatoes.  You will be allowed to eat freely from a variety of other salads on display.  Black and green olives, fried eggplant, pickled or fried cauliflower, slices of fried pita seasoned with zaatar (the biblical hyssop and sesame seeds), chopped garlic and even sometimes French fries.  You can buy a half  portion – it’s called a “hetzi mana”, or a full portion “mana” – a whole pita.  Falafel costs around  US$6.00 for a full portion and around US$4.00 for a half a portion.

Top Tips for Eating Out

Navigating the Holidays After Divorce

Hefetz: Netanyahu sat next to me while we edited his Walla interview