Seaside savings – where can you find the best valu...

What is Lag B'Omer?

Lag B'Omer refers to the thirty-third day of the Counting of the Omer (Sfirat Ha'Omer) and the 18th day of the Hebrew month of Iyar. There is a biblical mandate to count the Omer and it is a mitzvah to count seven complete weeks from the day after Passover (Pesach) night ending with the festival of Shavuot on the fiftieth day. The 49 days of the Omer correspond both to the time between the physical exodus from Egypt and the spiritual liberation of receiving the Torah at Mount Sinai on Shavuot.  It was also the time between the barley harvest and the wheat harvest in ancient Israel.

When Lag B'Omer commences on a Saturday night the Rabbinate ask the public to postpone their bonfires until Sunday night so that the Sabbath will not be desecrated in any way.

How is Lag B'Omer celebrated in Israel? 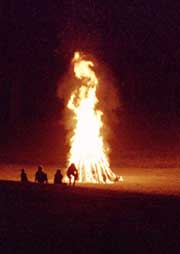 Lag B'Omer is a fun time for school children in Israel. They get together with their classmates, light huge bonfires, roast potatoes in the fire, sing songs and play games.

Teens get together, sometimes on the beach, light their fires and celebrate with a "kum-zits" long into the night. The word 'kumzits' is derived from the Yiddish words קום (come) and זיץ (sit).   The word is used to describe an evening gathering that Jews partake in. Everyone sits together, be it on the floor or on chairs, and sing spiritually moving songs.  Older teens incorporate a sleep-over with their 'kumzits'.  You'll see them in their sleeping bags scattered on the beaches.

Another Lag B'Omer tradition is for  little boys, aged 3, to have their very first hair cut.  In Israel, it is traditional to hold  this ceremony at Har Meron.  Called an 'opsherenish' (Yiddish for shearing), it is the point at which a Jewish infant becomes a Jewish boy and it is marked by cutting off his long tresses.  This rite of passage is just as significant to some as a Bar Mitzvah ceremony is when a Jewish boy becomes a Jewish man at age 13.  The 3 year old boy is presented with his first talit katan, the ritual fringes that he will wear from this day on, underneath his shirt, and for the rest of his life.

According to tradition, the 'opsherenish', was first practiced by the "Ari" as he is commonly called - the Kabbalistic master Isaac Luria Ashkenazi (1534–1572).

During Sfirat HaOmer, the Counting of the Omer, it is not permitted to cut your hair - shaving is also forbidden.  On Lag B'Omer however, it is permitted. Jewish men who observe this practice will cut their hair and shave their beards.

Celebrations between Pesach and Shavuot are restricted, but on Lag BaOmer they are permitted and so it is a very popular day to have a wedding.

Tips for building your fire

A tip for your family's laundry-hanger-upper!

Don't hang or leave laundry outside to dry on Lag B'Omer.   It will smell of smoke in the morning and have to be rewashed.

10 of the best Lag B'Omer jokes to share  around the bonfire. There is nothing quite like Jewi...

What is Lag B'Omer? It says that a Tzadik chooses the day he wants to leave this world. Though...

Counting 49 days up to the Omer. Hebrew: ספירת העומר   The Omer is counted every evening aft...

Call it what you want: Heatwave, Hamsin or Sharav - 50 days of heat & dust. Current weather con...

Know who's near. Locate English-speaking, oleh-friendly professionals in your area.

Water level of Lake Kinneret - Sea of Galilee. On the shores of Lake ...

What not to bring on Aliyah to Israel - 7 suggested items. There is n...

The Hebrew month of Adar aligns with Pisces. We are now in the Hebrew...

Why do we dress up on Purim? Is it all an illusion? Contributed by Ra...

Bad job listings.  Look out for the warning signs and avoid these...

Driver's license renewal and health examinations for seniors in Israel...

What is the real cost of living in Israel?  When I move, will I h...

Candle lighting times and information for Shabbat. "One man's candle ...

Aliyah Planner - Six steps to a making a successful Aliyah. Whether y...

Brush up on road safety, traffic and driving laws for Israel. Driving...

Israel's National News of the Day. A selection of the latest headline...

Seaside savings – where can you find the best value holiday home? As ...

Travelers from the Far-East - The latest Israel Ministry of Health gui...