I am not sure how long it will take before I manage to get on a flight back to Israel.  This story may end in a few days, or fear of the South African variant may result in it continuing for a while, but while I wait, I thought I’d share the experience. This is not intended to be my sob story – it is meant to bring awareness to those who are not aware of what is going on for some of us abroad. 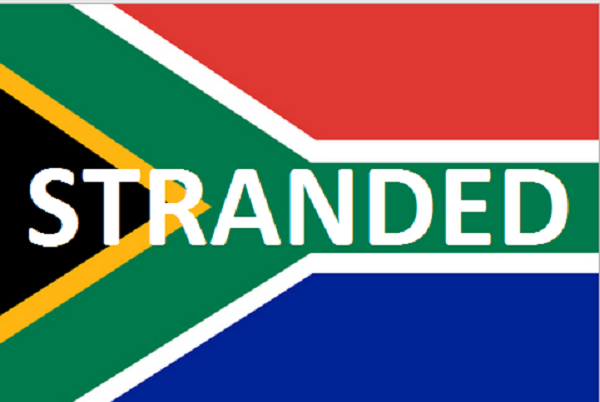 My story begins after midnight on Friday, January 23rd, 2021.  The dreaded phone call arrived, the call that I have thought about many times over the last few years, the call that can only be bad news.  I can hear my brother’s voice on the other end quavering.  “What’s wrong?”, I ask. “Mom, she’s stopped breathing” he answered.

South Africa is in full lockdown, there is a curfew.  “I’m going down to mom’s cottage to see what’s going on” my brother says (I respect their privacy so I’ll refer to my brothers as S and E from here on).  As thoughts begin to fill my head, I forget to tell S to call me back. All logic escapes me. I wake my husband and tell him what has happened. We have a short conversation, and when I think back on it, I realize that I had not grasped any of it at all.

“She’s stopped breathing. He’s going to see what’s going on. Nwabisa (the carer on duty) has taken her to the emergency section”, and in all that, I figure that there is still hope.

I wait and wait, S does not call back.  His Whatsapp shows that he hasn’t been online since he called me. I am pacing up and down.  I send him a message – “Call me, let me know what’s going on”.  A few hours later around 3am, he calls. “She’s gone, Sue”

The last 10 years of my mothers almost 90 year-long life, had been filled with dementia related issues.  Her cognitive abilities diminishing day by day. She couldn’t hear me when I phoned, she refused to wear her hearing aids.  All she would say is  “Sukela is that you? What are you saying? I can’t hear, are you coming?”.  I would talk to Julia regularly, another one of her three caregivers – “Yes, she’s fine, she’s eating, she’s sleeping, but she is fine, you know she is old now”. Julia said that to me every time except for earlier that week when she said “she seems weak”.

“She’s gone Sue”, I hear S say, and slowly I realize that my dear mother has just died. My mother is no longer. She took her last breath in her sleep.

S and I weep together for a few moments and then begin to talk about the next steps. I volunteer to call E, the elder of my two brothers in Melbourne.  It’s Shabbat and he is observant.  He won’t answer. How do I let him know, we have to move fast. We both have to cross continents and corona restrictions will make it doubly difficult.

Naturally, E doesn’t answer.  Shabbat or not Shabbat, I send a message “Call me asap. Mom!”.  About 20 minutes later he calls and of course, he already understood what the message meant. He lets out a yelp and cries a bit.  We end the conversation shortly thereafter both of us now faced with getting to South Africa within the shortest possible time.

The practicalities of getting on a flight ensue; there is serious talk of shutting the airport down and travel will be for emergency purposes only.  What has to be done in order to get out the country? Could it transpire that I may not even be able to go?

Luckily the day before mom’s death – Thursday, I received my second Pfizer Covid-19 vaccine earlier than most because of the risk involved with my chronic condition. (I now believe that was divine intervention)

After getting disconnected with the Ethiopian Airline’s call center in Addis Ababa a few times, I finally manage to book a ticket directly to Johannesburg where my mother wished to be buried next to my father.

I need a negative Covid test (not more than 72 hours old).  Will the results come in time for me to board the Sunday night flight?  I am assured they will.  I spend Saturday preparing and making arrangements.  I speak to S every couple of hours and he updates me all the time.  I make my way to the corona drive-in testing site in Haifa and have the test.

Everything is in place,

Her funeral will be slightly delayed because of Shabbat.  The Chevra Kadisha is willing to give us a window so that E and I can get to South Africa. Her body needs to be moved from Cape Town to Johannesburg but that’s not complicated (or so we think) – it’s only a two hour flight.  Her funeral is expected to be on Tuesday afternoon.

Sunday morning S calls.  There are more delays because of Covid.  South Africa’s public health regulations need to be adhered to and all the red tape needs to be sorted. The funeral could be Wednesday. S asks me to change my ticket and fly to Cape Town first and then fly up with him to Johannesburg.

In the meantime, the official announcement comes through that the airport will be shuttered commencing midnight Monday, 25th January. I breathe a sigh of relief, I’ll make it out in time.  It’s risky. There is talk of it being shuttered for a few weeks but I cannot over think this, this is for my mother and it’s my final act for her.

My negative covid test comes in in time.  I can leave on the Sunday flight and connect to Cape Town instead of Johannesburg.

I contact the airline to change the second part of my ticket. I tell them that I am booked on the Sunday flight but need to change my final destination.  “Which Sunday flight?” the service representative asks.  “Tonight’s flight” I answer and think “what?” to myself.  “There is a flight just after midnight Saturday arriving Sunday and a flight after midnight Monday arriving Tuesday” – the sweet call-center customer service representative, Bianca, tells me.

I am unaware at this stage that this is just the beginning of a long list of hitches, glitches and delays.

I pay the airlines $100 change fee to change the flight. I will arrive in Cape Town Tuesday lunchtime and will have to fly up to Johannesburg 12 to 18 hours later. There is nothing I can do, I’ll have to wait it out till Monday night, but I am now basically set to go.

S keeps calling me, there is one delay after another on the Cape Town side. I’ll spare those details – they are way too private. I can hear that the stress is getting to him.

In the meantime my brother in Melbourne calls – he can’t make it.  He can get out of Australia but due to the recent spike in cases there (almost nothing compared to Israel) the Australian government has issued a directive that all travelers entering the country, have to quarantine for two weeks somewhere in the outback at their own expense. He can’t be away from his business for so long.  It’s upsetting.  He arranges a memorial service for our mother at his shul in Melbourne.

The official announcement comes.  Ben Gurion will shutter at 24:00, January 25th.  My flight is 12:45.  What now? Another announcement, anyone who is already in possession of a ticket will be allowed to travel pending approval from the Exceptions Committee. I am hugely relieved but nothing is certain until I have final approval in my hands.  I find the application form online and need supporting documentation to prove the reason for my travel. A few hours go by before I manage to submit the application with an official death report which S had to send me.   Approval comes within half an hour and all is set, or so I think.

There is the trusted 947 Egged bus but I prefer not to sit in a bus with 54 other people breathing covid on me even though I am now fully vaccinated.

I call the sherut service. “No”, I am told, “the airport is shutting down ‘geveret’ (madam), we are not providing that service. There is no point”. The lady on the other end continues ” but there is one other person who needs to get from Haifa to the airport as well, perhaps you would be willing to share a taxi?”. Yes of course, I don’t hesitate.  “The driver will call you in a while and you can get the details from him”. He calls eventually and we figure a price (hugely inflated as he knows I have no choice).

On Monday afternoon as I am preparing to say goodbye to my family it’s announced there will be roadblocks on the way. The usual two hour trip to the airport from Haifa took 3.5hrs but I got there in time.  I check in and the attendant asks me for my signed health declaration.  What’s that all about? Who knew I was supposed to fill that in.  She gives me a copy of the form to fill in.  The flight to Addis Ababa left on time as did my connection to Cape Town.

S is supposed to pick me up at the airport and from there we’ll go to wherever and do whatever needs to be done.  At least we’ll be together to support one another.

I wait. About two hours go by and still no sign of S. Eventually after numerous phone calls backwards and forwards he tells me that there are more delays.  He’ll elaborate later.  I get an Uber and arrive at his home 3/4 hr later – 24 hours after my departure from my home in Haifa.

The South African health requirements are more complicated than we thought.   As a result mom’s funeral is now expected to be on Thursday – a totally unusual set of circumstances prevail that neither the Hevra Kadisha in Cape Town nor the Hevra Kadisha in Johannesburg can work around. I will not get into those details.

My cousin in Israel, a Rabbi, tells me that no matter what happens, in this entire process and the exceptional circumstances and hurdles we have been faced with, we are looking after and taking care of our mother, that is our mission and that is all that counts. S and I feel a little better after that.

Finally, my mother is laid to rest on Friday morning. One day short of what would have been their 66th wedding anniversary, my mother returned to my father’s side for eternity.

We fly back to Cape Town for our Shiva. We need to immediately commence the process of sorting her belongings as I am booked to return to Israel on February 15th.

YOUR PLACE OR MINE Home Cooking Service

Running a Business in Israel