7 facts about Amos Oz, one of Israel’s greatest authors. 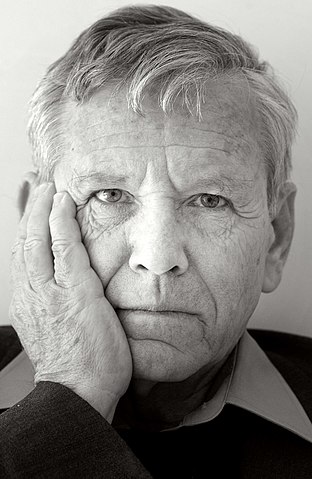 Israeli author, Amoz Oz was born Amos Klausner in 1939 and grew up in Jerusalem.  His father’s family were from Lithuania (near Vilna) while his mother’s were from Rivne – then Poland but now Ukraine.

Amoz Oz’s parents were multilingual; his father claimed he could read 16 or 17 languages.  His mother spoke 5 or 6 languages and could read 7 or 8.  In spite of this, neither of his parents were comfortable speaking Hebrew and so the only language they allowed him to learn was Hebrew.

Oz’s mother suffered from depression and when Amos was 12, she took her own life.

At age 14 Amos Klausner moved to Kibbutz Hulda in Central Israel.  It was here that he changed his surname from Klausner to Oz (Hebrew: courage) and also started writing.

Oz published his first book, Where the Jackals Howl, a collection of short stories, in 1965

In his lifetime, Amoz Oz published 40 books. His works have been translated into tens of languages, including Chinese and Esperanto – more than any other Israeli writer.

He was the recipient of many international literary honours and awards as well as the Israel Prize.

Oz’s family requested that his organs be donated, and his corneas are to be transplanted to waiting patients.

Oz’s casket will be placed at the Tzavta Theater in Tel Aviv on Monday morning for the public to bid him farewell. A memorial ceremony for Oz will be held at noon. His funeral will be held at 3 p.m. in Kibbutz Hulda.